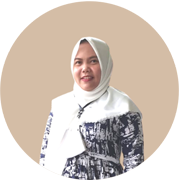 Nisa Istiani or we call Mbak Nisa is a researcher, lecturer and consultant in the field of law. Completed S1 at the Faculty of Law, University of Indonesia and S2 at the School of Law, University of Wisconsin, United States of America. Currently completing a doctoral program at the University of Washington, United States of America. Mbak Nisa has 21 years of experience in law and development. He had worked for five years at the Office of the Judicial Reform Team at the Supreme Court in the implementation of the “Judicial Reform Blueprint”. Mbak Nisa has also worked with various international development organizations such as being the Technical Coordinator for Judicial Reform in the AIPJ-Ausaid Project, Deputy Project Manager for Justice Sector Reform Program Support for EU-UNDP, and Project Manager for the Rule of Law Program at the International Development Law Organization. (IDLO).

In addition to being active in judicial reform activities, Mbak Nisa is also active as a lecturer at the Faculty of Law, Al-Azhar University, Indonesia.