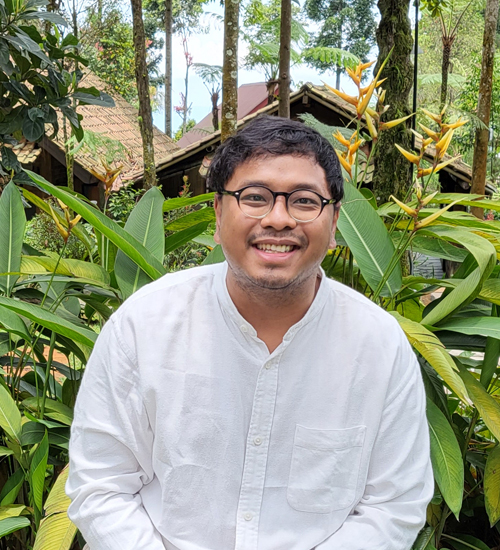 Dio Ashar Wicaksana (Dio) has been worked as Executive Director of IJRS since 2019. Dio has been actively working in the field of research and legal advocacy since 2012. During his career, Dio has experience in research in the legal and social fields. After graduating from the law faculty, Dio started his career in legal research at the Indonesian Judicial Monitoring Society (MaPPI-FHUI) since 2012 until he became the Daily Chair for the 2018-2019 period. Then, Dio continued his career as a researcher at IJRS by serving as Executive Director in late 2019.

Dio has been graduated from the UI Faculty of Law with a specialization program in Constitutional Law in 2012, then continued his education at the Oñati International Institute for the Sociology of Law in Spain, taking a master’s degree in Socio-legal. In addition to formal education, Dio has also completed several short-courses on Governance and Anti-Corruption at the International Law Institute, Washington DC, USA (2015), Human Rights and Transition Justice Course by AJAR in Jember, Indonesia (2017) and short-course Legal Empowerment Leadership Course at Central European University, Hungary (2019).

In the field of research, Dio has been active in research on issues of judicial reform and the implementation of access to justice in Indonesia. Some of his writings have also been published in national media and journals.

Apart from research, Dio is also actively involved in several strategic activities in policy formulation. Dio has experience as a member of policy makers related to judicial issues, as in 2019, Dio was the coordinator of a civil society consortium to compile an index of access to justice with the Indonesian National Development Planning Agency and also a member of the drafting of legal aid service standards at the National Legal Development Agency (BPHN). In addition, Dio has also been involved in the selection team for the 2019 Prosecutor’s Commission Commissioner Selection paper and the Judicial Commission Commissioner Selection paper selection team in 2020. Dio has also been actively involved as a research team in simplifying court decision formats as well as drafting a certification module for corruption judges and judges. preparation of e-learning teaching materials for information officers at the Supreme Court. Currently, Dio is a member of the Access to Justice Working Group at the Indonesian Attorney General’s Office, with the task of providing policy assistance or strategic implementation related to the implementation of access to justice at the Indonesian Attorney General’s Office.