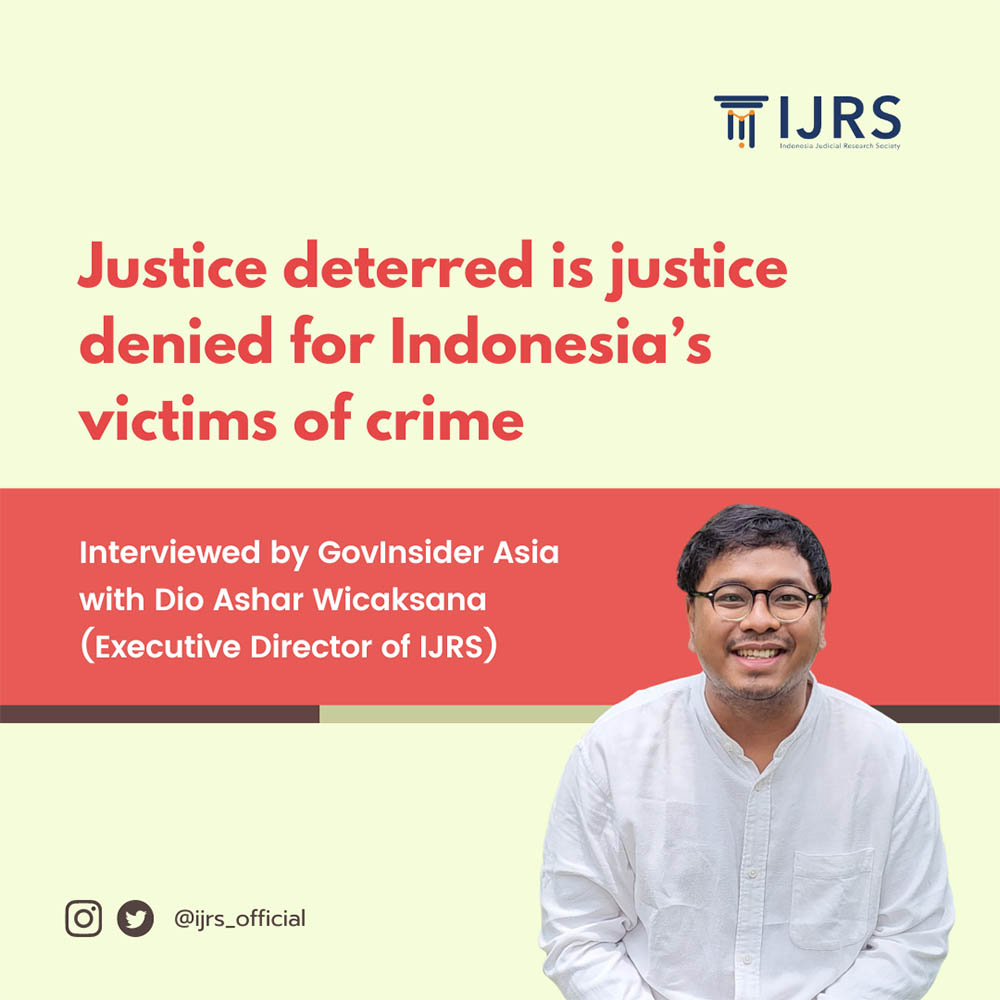 Earlier this year, Indonesian boarding school owner and religious teacher Herry Wirawan1 was found guilty of raping 13 of his female students aged 11 to 16, impregnating eight of them. They had given birth to nine children. The 36-year-old man was handed a sentence of life in prison.

Cases of sexual assault are not uncommon in Indonesia, but the attention the Herry Wirawan case received was unusual, as most such offenses typically go unreported to authorities.

A study2 by the Indonesia Judicial Research Society that surveyed 4,196 people in 2019 found that more than six in 10 respondents had faced problems during the previous three years that should fall within the purview of the law. Yet almost four in 10 Indonesians do not report such problems to authorities because they lack faith that Indonesia’s justice system will deliver satisfactory outcomes, according to Dio Ashar Wicaksana, Executive Director of the Indonesia Judicial Research Society (IJRS).

Dio says many Indonesians prefer informal mechanisms of resolving issues that elsewhere might be dealt with through legal mechanisms, leading many to seek informal legal assistance from paralegals, family members and other people in their own circles rather than “outsiders” who may not fully understand their situations.

The reason for this aversion to the official machinery of the justice system may be the product of repeated and widespread negative experiences with it, such as those among women in sexual assault cases detailed in a report3 by the IJRS this year.

Indonesian courts, and society more broadly, frequently exhibit misogynistic attitudes towards women who have suffered sexual abuse, who are often accused of “asking for it” because of their choices of clothing, occupations or body language, or because they have dared to venture out at night.

Such smearing positions women as a “source of problems that encourage men to commit acts against the law”, rather than as victims of sexual assault, according to the report. It says: “Such a situation seems to provide justification for the violence suffered by women as well as an element of forgiveness for men who commit violence.”

And the shortcomings of the justice system extend beyond cases of sexual assault. Many people involved in various types of disputes experience physical, verbal or psychological forms of violence from other individuals, law enforcement and other parties. These include disputes involving family and children (32 per cent of incidents featuring some kind of violence), land and environment (30 per cent), and housing (21 per cent).

The IJRS’s 2019 report concluded that if the government allowed the situation to persist, people’s trust in the mechanisms of law enforcement would be diminished, making victims of violence increasingly reluctant to report it.

Dio says that although addressing the pervasive lack of trust in Indonesia’s judicial system is important, the government should, as an interim measure, provide more funding to support informal legal assistance mechanisms to improve people’s access to justice.

He says a positive aspect of community-based resolutions is that they address rural people’s lack of access to formal legal assistance, since most lawyers are based in cities. He says such community systems obviate the need for people in rural areas to travel cities to obtain legal help.

“But the biggest challenge with informal legal aid is that we don’t have a guarantee of good legal knowledge,” Dio says. “Family members might not have the best understanding of the law, so the outcome might be wrong or misjudged.”

To tackle this problem, the IJRS is calling on Indonesia’s Ministry of Law and Human Rights to support legal empowerment in communities by providing legal training to people such as paralegals who reside in such areas, better equipping them to operate as “agents of justice” by representing local people and sharing legal knowledge.

Yet community-based dispute resolution mechanisms have limitations, and must be accompanied by longer-term, infrastructure-focused measures.

First, paralegals can help to settle matters only outside of the court system, requiring qualified lawyers to step in when disputes escalate to the courtroom level.

Second, almost nine in 10 of the victims of sexual violence personally know the people who have abused them. Findings from the 2022 report revealed that 25.2 per cent of perpetrators of such violence were victims’ boyfriends, 26.8 per cent were family members, 12.7 per cent were friends, and 12.4 per cent were neighbours. Almost six in every 10 victims (59.9 per cent) were sexually assaulted in their own homes.

The personal and geographical proximity of perpetrators and victims limits the effectiveness of community-based resolutions, and currently, less than half of 1 per cent of victims are assisted by legal counsel, even though 78.1 per cent of such cases occur in rural areas.

Dio says technology can help to bridge these gaps in access to justice, and that online trials have become more commonplace since the beginning of the Covid-19 pandemic. Online platforms that allow people to look into legal protection or assistance have also gained popularity.

However, access to legal technology across Indonesia remains patchy. “In small provinces, the prosecutor’s office might still be collecting data and manually recording them in a book,” Dio says, adding that this places a responsibility on the government to provide funding for digitalising the justice system.

Dio says the single biggest obstacle to financial provision for legal tech is that governments don’t understand the importance of data in informing policy. “There’s a culture for legal policy in Indonesia, in that it is not always coming from good evidence,” he says.

He says local governments need to know the most common types of crime to be able to allocate budgets efficiently. For example, if sexual violence is the most frequently committed crime in a city or town, more funding needs to be allocated to psychological and medical assistance for its victims.

The paucity of current provision is underscored by the fact that only one in 1,000 women sexually assaulted have received compensation for the psychological, physical and financial harm they have suffered as a result of such crimes.

Grim statistics such as this are what has prompted the IJRS to work with the Attorney General’s Office to support better analysis of the needs of crime victims in order to improve people’s access to justice.

“We have a focus to encourage reform in Indonesia’s criminal justice system, in our criminal procedure law, and also in the issue of sexual violence,” Dio says.

The case of Herry Wirawan may have been an outlier in terms of the legal attention it garnered, but if the IJRS is successful in its aims of helping to bring about more approachable, accessible justice for Indonesians, it may not remain so.

This interview published by GovInsider : https://govinsider.asia/intelligence/justice-deterred-is-justice-denied-for-indonesias-victims-of-crime/