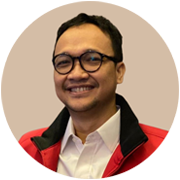 Junaedi Saibih or commonly called Bang Juned has been a teaching staff in the Field of Procedural Law Studies, Faculty of Law, University of Indonesia since 2002. He obtained a Bachelor of Laws in 2002 and a Master of Science in European Studies in the Specialty of European Law from the University of Indonesia in 2005. Then Bang Juned continued his studies and obtained a Master of Law (LLM) from the University of Canberra with a scholarship of Australian Development Scholarship Awards, and then returned to continue his education at the Doctoral level of Legal Studies at the University of Canberra and submitted his PhD Thesis in 2016.

In addition to the formal education above, Bang Juned also had the opportunity to take part in informal education including: Summer University Program at Central European University (CEU) in Budapest, Hungary (2009), Summer University Program on Ethics and Human Rights followed by sponsorship from the Public Interest. Law Institute (PILI) at Columbia University (2009), Research Fellows at the Asian Law Institute at the National University of Singapore (2017), Teaching Fellows at Mykolo Romerio University, Lithuania for the support of Erasmus + Teaching Mobility Programs (2018).